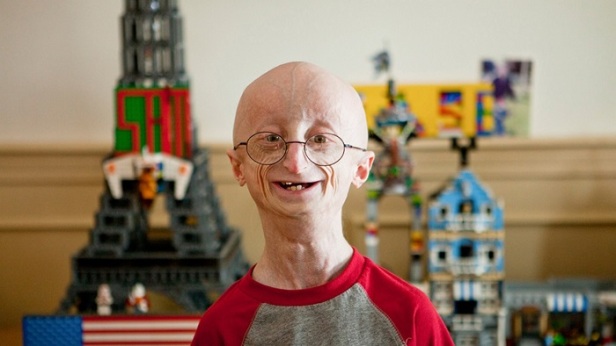 Today I would like to share an inspiring story about a guy who had been diagnosed with a rare disease called “Progeria“. It’s a rare and fatal genetic condition which is characterised by an appearance of accelerated ageing in children. Most children with Progeria do not live past their teens. And the young kid about whom I’m about to talk is none other than Sampson Gordon Berns better known as “Sam Berns“. Born on October 23, 1996 to Scott Berns and Leslie Gordon. But unfortunately we lost him on January 10, 2014. Sam is an extraordinary kid with great thoughts in his mind. He never felt low with the disease he is suffering and he never expected anyone’s pity on him. Even HBO produced a documentary about Sam Berns called  “Life According to Sam.” .

Once an interviewer asked Sam “What is the most important thing that people should know about you?” His answer was “I have a very happy life.” Sam said that Progeria did indeed present many challenges but that people should not feel sorry for him. Besides, he said, he was able to overcome most of the challenges anyway.

Sam’s philosophy has 3 main parts and Sam then prefaces his list of three with “Life moves pretty fast. If you don’t stop and look around once in a while, you could miss it“.

1. Be OK with what you ultimately can’t do, because there is so much you CAN do.

Sam said he is very much aware of the things he can’t do, like ride a roller coaster, but instead of focusing on that he focuses on the things he can do, and the things he is passionate about. Sam said you can put somethings that were impossible or out of reach before in the “can-do category” by making adjustments. To illustrate this point with an example he plays a clip of himself with the marching band, the story he opened with, which further illuminates his theme or his core message.

2. Surround yourself with people you want to be around.

Sam talked about the importance of having high-quality people and great friends in your life, and a close family. “We see each other for who we are on the inside,” Sam said of his friends and loved ones. You can see Sam gets choked up when talking about how the relationships in his life supercede even all the other positive aspects of his life. Our friends, our families, our communities, Sam said, are really the things that can make a huge difference in our lives.

Here Sam quotes Walt Disney: “Around here…we don’t look backwards for very long. We keep moving forward, opening up new doors and doing new things.” Sam said he was able to get through difficult times by always having something in the future to look forward to, even if it was just a small thing like a new comic book or a football game. “This mentality includes staying in a forward-thinking state of mind. I try hard not to waste energy feeling badly about myself, Sam said, because when I do I get stuck in a paradox where there is no room for happiness or any other emotion.”

Sam was so positive and so optimistic about his future. “No matter what I choose to become, I believe I can change the world. And as I am striving to change the world, I will be happy.” He showed a clip from the film which he said embodied his philosophy. Even though he had change in four years, he said, his philosophy had not. Sam told a story at the end of being very sick. It was a time he had to use all his strength and put his philosophy to the challenge. It was the three keys above that saw him through the roughest times, he said. “Being brave isn’t supposed to be easy, But it’s the key to moving forward.”

Hope you like this short story about a optimistic guy.

2 thoughts on “Sam Berns, His Philosophy for a Happy Life!!!”