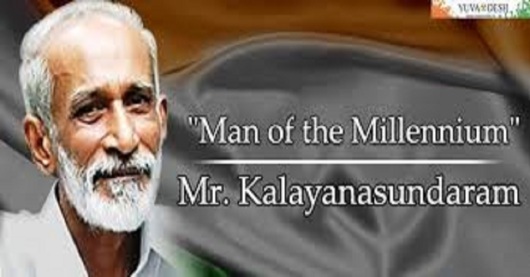 First time a day gap between my posts. Got stuck with few priority works but it doesn’t mean that this blog is a low priority stuff for me. Anyways I’m back with one of the best story about a wonderful person. We speak a lot about humanity, being helpful, kind etc etc. But do we really follow all these things in our real life? My answer is a Big No! Whatever the reasons might be, we are not even trying to follow these wonderful things in our life. May be sometimes in the middle of the night we might feel a bit heavy thinking about these things. But the very next morning will forget everything because of the life style we are leading now a days. But there are very few people in this world who would like to think about others, helping others etc in their lives. One such great personality is Palam Kalyanasundaram. Kalyana Sundaram has donated his entire salary from first day of starting his job as librarian till last day of his service including the Rs 10 lakhs pension money to charitable causes. He worked as waiter in a local restaurant to sustain his simple daily life.He is a bachelor, who felt marriage would be a distraction and has dedicated his life to serve society.Many of you don’t even know his name, coz now a days only super stars, sports stars, Dirty & useless politicians, unwanted scientific inventors comes into lime light. We are accustomed for this type of life style. Its not your or my mistake but this is the way we are taught to live in this society by everyone. So I would like to give a gist about this great man. So why Wait ? Let’s move on!!!

He was born in a tiny village of Melakaruvelangulam in Nangunari taluk in Tirunelveli, Tamilnadu to (parents) Paalvannanathan and Thaiammal on 10th May 1940. This tiny village did not even have the basic facilities such as a primary school, medical facility or electricity.

Mr Tamilvaanan told him that his was not his disability because all that matters is what people say about you. He further added, for people who make fun of you, make them talk about your great deeds. He went back to his village with great motivation and decided he will start helping fellow human beings.

When the India China war broke out in 1963, Prime Minister Jawaharlal Nehru made a public request on radio for people to donate to the National Defense Fund. Mr Kalyana Sundaram was a student in the Madras University was moved but had very little to spare and so he gave away his gold chain weighing 65 grams to Mr Kamaraj, the Chief Minister of Tamil Nadu. Mr Kamaraj was so moved by this gesture that he announced him as a national treasure and blessed him to have a great future.

After his donation to the National Defense Fund, Mr Kalayanasundaram met the editor of ‘Ananda Vikatan’ Magazine -Mr Balasubramanian. The editor warned him the path of service is a challenge and not an easy one akin to a constantly burning fire where people are forever lost in it. He also challenged Mr Kalayasundaram saying that providing for other people, using ones ancestral resources (money from parents or grand parents) is not true service. Although Mr Kalyanasundaram had been doing this for 10 years, this was not a true measure of philanthropy. He said “when you start working let’s see if you continue giving to others”. This fired up Mr Kalyana Sundaram and set him on a path of service for man kind his entire life.

Floods ravaged South Tamil Nadu districts in 1992 and people lost everything. Donations started pouring in for the flood victims. Mr Kalyana Sundaram chose a demographic of kids who had lost their books, school uniforms and stationary. He traveled to several villages and donated books, school uniforms and stationaries to 10,000 children. The legendary carnatic singer M S Subbulakshmi was so moved by this extraordinary philanthropic deed she invited Mr Kalyana Sundaram to her house and felicitated him.

This article in ‘Anantha Vikatan’ touched Superstar Rajinikanth and his wife Latha. Mr Rajinikanth announced Mr Kalyana Sundaram to be his adopted Father. He and his wife Latha invited him to stay with them forever. After 15 days of the hospitable treatment, Mr Kalyana Sundaram requested them to let him go since he felt imprisoned and there were people who needed him.

When the ultimate question of death kept cropping up in Mr Kalyan Sundaram’s life and he decided that this too must be done in true Kalyana Sundaram style! He went to the Dean of Tirunelveli Medical College and told him on his death he would like to donate his entire body for scientific research.

The Title “The Man of the Millenium”:

He was awarded “The Man of Millenium” award along with a prize money of Rs 30 lakhs (Rs 3,000,000) for his outstanding act of donating his entire salary from first day of starting his job as librarian till last day of his service and also the 10 lakhs (RS 1,000,000) worth of pension money to charitable causes. No prizes for guessing where all the money went.

His other awards included “UNO’s Outstanding People of the 20th Century” and “Life Time of Service Award from Rotary Club of India in 2011”.