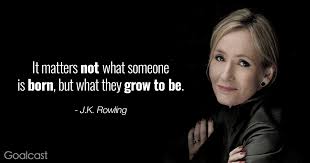 Harry Potter, I guess almost everyone in the world know about this great and famous movie series. But do you think everyone know about the author of this great series? If not, I would like to tell you about that Billionaire Author. J.K. Rowling, the author whose book series has been translated into 73 languages, sold millions of copies and accrued over $20 billion through movie adaptations and sponsorship’s. But do you think it was just a cake walk for her to achieve those heights? No, even she had her own hurdles to cross in her day to day life. She considered herself as “the biggest failure she knew” before beginning her first novel.

So,Let’s go through this rags to riches story of the world’s first Billionaire writer.

Start of the Greatest Novel and Mother’s Death:

It was the delayed train journey from Manchester to London, where the characters Harry Potter, Ronald Weasley and Hermoine Granger began to grow up in the mind of Joanne Rowling. For every passenger, it was the simple journey but for her, it was something else. She saw a vision of a young boy, of which she was unaware that the whole world would soon fall in love. She continued to imagine the world of witches and wizards of Hogwarts, Azkaban where the full cast of characters started to take shape. And at that time, she had no idea that these characters will make the magical story and she would publish “Harry Potter and the Philosopher’s Stone “, the very first novel of the “Harry Potter” series. In this way, the journey of the world’s beloved series of “Harry Potter” started.

The story of the novel was gradually developing when she was living with her mother in Manchester, but destiny has something else for her. At the age of 25, she lost her mother in the year 1991. The death of her mother shattered her completely. This happened after the six months when began writing “Harry Potter,” and she lamented that her mother never knew that she was writing it.

That is why, Harry Potter, has to suffer the death of his parents because in real life she too had suffered the demise of her mother.

After the death of her mother, she moved to Portugal for the change and taught English as the foreign language. In 1992, she married a Portugal TV Journalist Jorge Arantes. She became pregnant, gave birth to a daughter, Jessica. But her marriage didn’t last long, and only after 13 months she divorced him and moved to Edinburgh, with her daughter and the first three chapters of “Harry Potter”. By the end of 1993, the situations became more miserable for her. She was a single parent of a newborn baby living in a cramped apartment, penniless and she had no permanent work.

She went through depression and admitted that she even considered suicide. But she didn’t give up on her dreams. Her depression helped her to invent the evil characters like Dementors, dark creatures, feeding upon happiness which was introduced in her third novel, Harry Potter and the Prison of Azkaban.

She absolutely loves writing, therefore, she spent much of her time writing in cafes only after her daughter had slept.

For the sake of survival, she rented her apartment and was forced to live on state benefits. And she used that money to look after the needs of her daughter. She was ashamed, distressful and had no idea where her life was going. But the tough situations, didn’t break her, she spent the most of her time writing while sitting in the local cafe.

She kept faith in herself and on “Harry Potter.” She became so obsessed with her book that she not only portrayed the main characters by herself but she wrote down the name, house and magical powers of every single student of Hogwarts. By this time, all the failures, setbacks she faced, had eventually made her stronger. And after the sheer patience and hard work of 5 years, she finished her first book. and the first edition of Harry Potter was completed.

Time for Rejections: 12 Best Publishers Turned Down Her Book

It was the year 1995, the struggle of getting it published began. She remade the first chapter of her book for fifteen times! She knew that getting it published is never going to be easy. She received replies from the publishers as, “It is too difficult for children, It is too long, Children would not be interested in it.”

Her manuscript was rejected by the top 12 Best Publishing companies. She got disappointed and had no idea what to do now.

Time to Become the First Billionaire Author in the World:

Finally, the publishing house in London, Bloomsbury gave her green signal. She added “K” to her pen name and just for $4000, Bloomsbury brought the rights of Harry Potter from the J. K. Rowling. Her book hit the shelves and faced instant hit. The book won the British Book Award for Children’s Book of the year. Eventually, In 1998, US publishing company, Scholastic Inc. brought its rights for $105,000 and this was the time when the whole world was about to hear the magical story of Harry Potter.

By the time the whole world fell in love with Harry Potter, her third and fourth edition had broken all the records. Her series of seven books has since sold more than 450 million copies which transformed her life completely. Later on, Warner Brother purchased the film rights to the first two novels for $1.5 million.

In 2011, Forbes estimated her total worth about $1 billion and that made her the wealthiest author of the world.